Keep this memory close to your heart…

on Christmas this year, my littlest ones. My hope is that you will remember it forevermore. For a little background, I present this:

I was born to be a mother. Now that is a silly statement isn’t it? I have known this deep down in my soul since about a month or so after my fifteenth birthday. At least that is what I wholeheartedly believed, through thick and thin, through tears and heartache, through triumphs and defeat, through love and sorrow. That does not suggest that I was ever a perfect mother, just a mother with a perfect love for her children. My children will likely think I have lost it when, or if, they read this, but what I am trying to convey here is not really for them, it is for the successive generations. I have since seen very clearly that my status as Mother was not really meant to be where I could make a difference. The difference I was born to make was to be the Memory Maker for my descendants. I still have a small pillow that my daughter gave me in the 1980s; on it is embroidered, Moms Make Memories. I guess she knew what my purpose in life was to be before I did.

Family history has always been so important me. The importance really hit home by the time I had lost most of my family elders. This was before my two oldest children were really old enough to know what extended family offered and learned to cherish it. My youngest child has never had a grandfather living during his lifetime or great-grandparents and so on. It was much to my dismay that I realized that my children did not even know who a small portion of their living extended family was; recently some of that has been corrected for my daughter. Growing up, us four (later to be five) siblings basked in the land where our ‘Grands’ and some of the earlier generations were still in our lives. The number of first cousins was huge; and beyond that the relatives were innumerable. Some of our first real true friends were our first cousins. Many remain so today; those who have not stayed in touch remain just as important as well. Beware, what is to come is really mushy expression of love for my family; this is stated so you can exit now if you so desire. For the brave, the story continues…

In 1985 my only grandchild was born. I regret that I failed to really ‘spoil’ him, but circumstances and life are my explanation. I told him once that I would walk in front of a truck for him. I still mean that. Zac Sledge is all grown now and has a family of his own. Now my daughter, mother, myself and others had wanted a little girl in our family for so many years it is not even funny. We have the perfect grandson….time to know perfection through a girl. Well, our wish came true when Zac and Anna Harmon Cain married. Anna is beautiful perfection of what a mother’s love should be.

The truest form of perfection came when my first great-grandchild was born. On December 20th 2005, God gave me the most beautiful set of wings. I have always loved to sing even though I can not carry a tune in a bucket, the cat wails, and my children beg me to just stop it. But the song, “1,2,3 Like a Bird I Sing” became my anthem in honor of that day in 2005. That was the day that the most precious, wonderful, bundle of humanity and love was born into our family; and he is really, really smart, too. Logan Thomas Sledge owns my heart from that day forward. I hum that song almost on a daily basis.

Was I not blessed enough by the birth of Logan? I guess the man upstairs did not think so, or was it Zac and Anna? For on the 31st of May 2009, I got a double set of wings with the birth of another little piece of my heart, Taylor Anne Sledge. The other day her mom posted a video that was actually only captured audio, of my Taylor Anne singing to me. Her brother joined in with her. The song was “Rinky Dinky Do, I Love You” and it was just what I needed and I loved it so. Logan: perfect little man. Taylor Anne: perfect little lady. Both artfully disguised as mere humans, but they are actually little angels and they now have  me singing another song today: “Like a Bird Without Wings.” The video of the song, with Damian McGinty, is sung by Celtic Thunder. The words (yeah, I changed the wording to suit this narrative) of the song will follow at the end of this article.

My strongest wish is that these two little ones grow up with love in a home with both parents present, that they cherish each other, and are always the other’s best friend forever. Sometimes sibling rivalry rears its ugly head, but Taylor Anne has the advantage of being the stronger one while Logan is a thinker. Their mom told me recently that they were aggravating each other when Taylor Anne told Logan, “Bubba, if you don’t stop I am going to beat your brakes off, then you can’t stop.” That was a pretty profound statement coming from a two-year-old. And yes, she calls him Bubba just like I wanted; now if he would only refer to her as Sissy like my Daddy did his little sister that I always thought was so endearing…he called her this all his life long. I also hope that the thoughts expressed here might be preserved for Logan and Taylor Anne as cherished memories from their GG.

Be it known that I love these little souls more than life. Always have. Always will.

A Bird Without Wings: Lyrics

Like a bird without wings that longs to be flying,

I wouldn’t know what to do  I’d be lost without you watchin’ over me.

I count every moment, I wait every day,

Until I am  home again and you hug me so tight

That’s when I know Everything is alright.

Like a bird without wings that longs to be flying,

I wouldn’t know what to do I’d be lost without you watchin’ over me.

You’re my guardian angel; my light and my guide

My hand on your shoulder and you by my side.

You make everything beautiful,

You make me complete.

Everything in my world I lay at your feet..

Like a church with no steeple, where a bell never rings.

In a town without people, where no voice in the choir ever sings.

If a boat on the ocean would be lost with no sail,

Then without your devotion

Surely all that I dreamed of would fail.

Like a church with no steeple, where a bell never rings.

In a town without people, where  no voice in the choir ever sings.

of wife beaters…ya think? Most anyone can be a father, but it takes someone special to become a DAD.

He is such a good little photographer…

just look at the magic that happened when he snapped this family portrait with his new camera Santa brought him for Christmas last year. Yep. That’s my little Logan. He is the Loganator. Gotta love him. 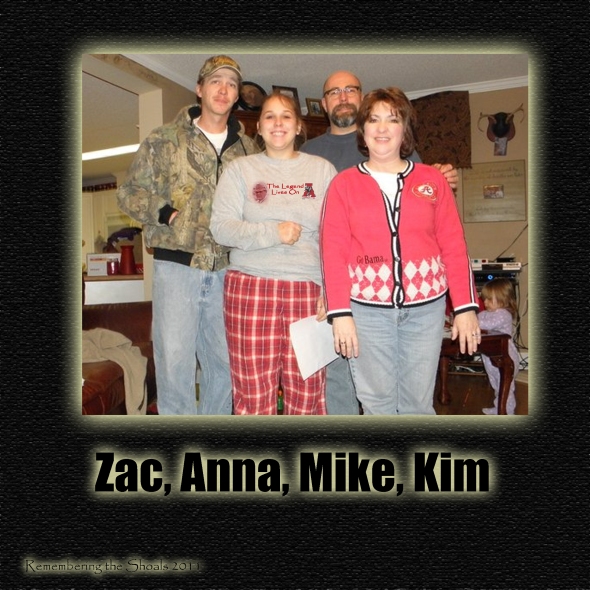 If you look closely, our Taylor Anne Sledge is in the background and  happy playing with what Santa brought for her.

I know he can hear me right now…

Zac and Anna and those babies live in Cherokee, Alabama. Logan started Pre-K this year at Cherokee Elementary. His wonderful, and beautiful, teacher is Candi Rutland Malone. Taylor Anne is my little Queen-of-Quite-a-Lot. Logan used to pretend to be the foreman at the job – Jeff Sherrod. He was a really awesome foreman; he got a work badge to prove it.

Hey, Jeff Sherrod, I know what you want for your birthday! Roll Tide gear, right?