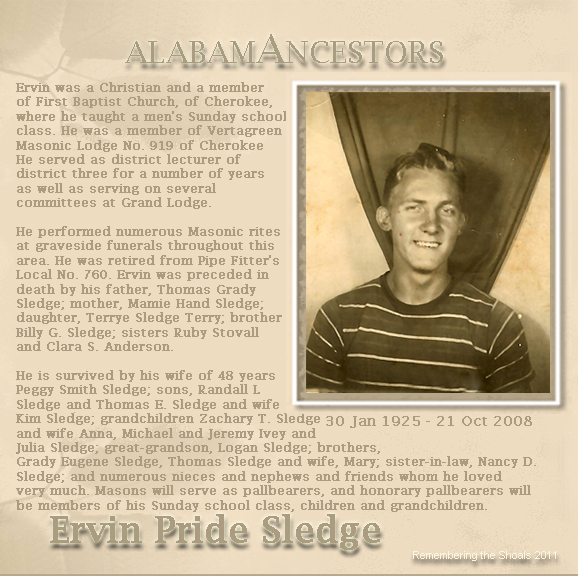 brings a lump to the throat. When Terrye passed away after suffering so horrifically with Lou Gehrig‘s, my grandson Zac Sledge, lost his only aunt. An aunt that loved him very much. An aunt that he loved very much.

Terrye lived in Tuscumbia. She was a Librarian by profession. She was a lovely person. The ones who were little at the time remember her reading Clifford the Big Red Dog books during story time at the Library. She worked at the Florence Public Library and the Helen Keller Library in Tuscumbia. She graduated from UNA.

Terrye married Fred Terry from Leighton and they lived mostly in Tuscumbia. Terrye’s Gargis and Sledge relatives lived in Sheffield and throughout the county.  Terrye died a year before her father, Ervin Pride Sledge, died. Watching her suffer and die must have been hard on Ervin and the entire family. When Terrye had passed away someone asked Zac what he would want, and he said nothing really unless it would be one of the diamond doorknobs. Terrye and Fred lived in a home with clear glass knobs on the doors. When Zac was little they caught his eye and he thought Aunt Terrye must be rich because she had diamond doorknobs. My Zac is a good guy; he wants so little and asks for nothing.

There was a photo of her in a motorized wheelchair, but that one will be put aside for the photo of her that was her when she was young, and fair, and lovely. It is a graduation photo. If you knew Terrye, would you please post memories of her?