Chepultepec was where there were Boxes…

but they do not seem to be but few of them there now.

Chepultepec, located less than forty-five miles northeast of Birmingham, was in Blount, County, Alabama. The name has long since been changed to Allgood and is less than five miles from Oneonta, Alabama.

This story article will give a little information on one of the sons of John Hatter M Box. This son, Milton Asbury Box, was born on 9 Mar 1841 and died 11 Feb 1918 in Chepultepec, Blount, Alabama.  His obituary reads:

Co I 49 AL Inf, CSA Milton Asbury Box first entered the service as a private 22 Aug 1862 at Chepultepec, Alabama. Continued until 15 May 1865. Milton Box, one of Blount’s oldest citizens, died at his home near Allgood, Monday. Mr. Box was 76 years of age and was a member of the Methodist Church. He spent nearly all his life in the community where he died. The deceased is survived by one son L. W. Box. The funeral was held Monday and was conducted by Rev. W. L. Hendrix. [Southern Democrat, Thursday, February 14, 1918]   Burial: Shiloh Cemetery Chepultepec, Blount County, Alabama, USA

Milton did not marry until age 44. He married a Mary Margaret whose maiden name is not yet known. He was a widower at the time of his death.  He was a farmer by trade. His father, John Hatters Box was born in South Carolina and his mother Jennie Stovall Box was born in Virginia. The son mentioned in his obituary was Luther Worth Box. 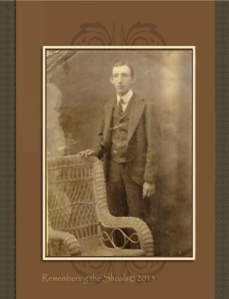 Luther and Nancy Box’s youngest son, Gordon Luther Box, entered service in the Army during World War II at age 20 on 3 October 1942 at Fort McClellan, Alabama. By age twenty-two he was killed in action. His death occurred 18 Nov 1944. He had only completed grammar school at the time of enlistment. He was single without dependents. He was 5’6″ tall and weighed 115 pounds. He served in the European Effort and was ranked as Private First Class at the time of his death. His gravemarker at Oak Hill Cemetery, in Oneonta has an inscription: “Killed in Service”.

Luther and Nancy Box’s son Clyde Earcy Box, Sr. served as a S2 in the U S Navy during World War II.  He is also buried at Oak Hill Cemetery.

Son Clarence Milton Box died 17 December 1981 in Maylene, Jefferson County, Alabama. He, too, served in the Army during World War II having enlisted 12 Feb 1942. His release date was 20 September 1945.

Their son Leonard Leroy Box’s obituary was in the Birmingham News 29. 1952 on page 35.  He had lived in Fairfield, Jefferson County, Alabama. When he died he was but 38 years old.