So, this will be an attempt to provide accurate data. Here is what is known, some of it is family legend; some of it has been documented. George Henry Peebles, for the large group of first cousins that I belong to, was our great-great-grandfather. And let it be known now, that I consider family just that, family, no matter their reputation, demeanor, or history.

The first point of interest is his name. The Peebleses were notorious for naming a child one thing and calling him/her another name. So, it is documented that  ‘Grandpa Dick”  was named at birth by his mother George Henry Peebles. His name likely came from his ancestors with those names.  The family knew him as  ‘Grandpa Dick.”  Mother, Slena Mae Peebles Murray, when asked what was his name she said,  ‘Grandpa Dick.”  She further surmised then that his name must have been Richard. And it is true that he sometimes listed his name as Richard after he married his second wife Eliza Holland. He was listed as Richard on some census records like the 1900 Federal Census record where they all lived  in the Center Star area of Lauderdale County, Alabama. That seemed logical since ‘Dick’ is considered a nickname for the formal name of Richard. The name issue posed a very difficult obstacle and interfered with any serious research on his life. It was two aunts that first discovered what his given name really was, Betty Lou and Charlotte Peebles. If I recall correctly, the homemade tombstone that Gran, Robert Peebles, made for him listed his name as Richard Peebles.

Since there are no photographs that have been located, one must glean his physical appearance from how  previous

generations have described him. Evidently, he was a man small in stature compared to other males in the Peebles clan who were over six feet in height. He must have been agile. He was known to demonstrate his temperament with physical actions. From what I have learned about him, he was fearless. The most reliable human source of accurate information, as far as I have found, was my grandmother, Drue Peebles. While sitting around her kitchen table one day, I asked her what Grandpa Dick looked like and she responded that Luther [Peebles] had a good resemblance to Grandpa Dick. Luther was likely a good resemblance to Grandpa Dick in personality as well, but Luther was funny and I suspect so was Grandpa Dick. Mama, Drue Peebles, said that Grandpa Dick would come to their house in Lawrence County many mornings. He would travel there by mule, this must have been a funny sight in and of itself. He would kid her by saying, “Now Drue, I didn’t come to see you. I came to see the baby.” Drue and Robert whose first child died, likely stillborn and the baby was their first living child, their daughter Preston.  The first infant was buried at a church cemetery around Leighton, according to what Preston had told me. This information puzzled me, as they were in Lawrence County; but the county boundaries for Colbert and Lawrence Counties changed and Leighton that had previously been part of Lawrence County was now part of Colbert County. Preston Peebles was born in 1920 in Lawrence County, so Grandpa Dick was about seventy-eight years old at the time he rode a mule to their home.

George Henry Peebles’  birthdate and place has several documents that verify the data. He was born below Elkton in Giles County, Tennessee on 9 March 1842. His parents were John M Peebles and Elizabeth Octavia Laughlin Peebles. His siblings that are known were: Emaline H Peebles 1836 –  ?  , Ann Menefee Peebles 1838 – 1900, Priscilla Laughlin Peebles 1840 – 1913, William M Peebles 1842 – 1891, Mary Peebles 1846 – ? , Sarah Reesanna Peebles 1849 – ? ,  Wynona Satoka “Toke” Peebles 1859 – 1916 and Margaret “Maggie” Peebles 1870 – ?. I have the Mclaughlin family documented back for generations, but I have been at a brick wall on the Peebles’ line for decades. It is my belief that the Laughlin name was originally McLaughlin and there is some documentation to that fact; further I believe that this family line included “Ole Red” McLaughlin who lived nearby the Casey’s in the Rawhide community in Lauderdale County. “Ole Red” claimed his home was at Cowpen Creek in Lauderdale County on his regular television show in the 1950s. Again, if I recall correctly, “Ole Red” was a musician as well.

Amanda Peebles Grider located the photo you see below that includes a son of Wynona “Toke” Peebles Woodard. Wynona Peebles Woodard was also called “Nona.” The photo caption should be corrected to read: Tully Woodard is the third person from left on first row: 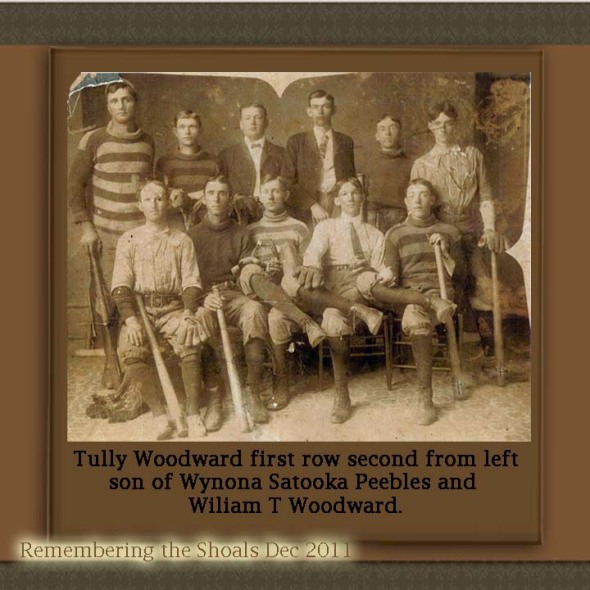 George Henry Peebles lived a colorful life, according to the legends attributed to him; many of which  he attributed to himself apparently. He was undoubtedly a spinner of tall tales and his grandson look alike, Luther, was known to tell some tall tales as well. One of the legends that was told by him was that he was the one that gave Teddy Roosevelt the stuffed bear that was thereafter named the Teddy Bear. The factual history of that event does not include a George Henry Peebles. And then, there are stories associated with him that were actual events but that he never credited to himself or at least were not remembered by those who could have passed them down through the family. Some of these tales will follow in our next article.

Mama [Drue Tolbert Peebles] would tell of his exploits in the military service during the War Between the States to us. Myself, my twin brothers Lowell and Joel Murray, would ask her to tell us stories and we would sit in the floor at her feet while she sat in her rocker at their house on West 8th Street in Sheffield. She told stories from long ago of ghosts and red eyes, and chains rattling. One story she told was that Grandpa Dick was frying his ration of meat, likely bacon, on an open fire. Along came Joe Wheeler and took his meat from the fire after which George Henry Peebles promptly kissed the side of his head with the frying pan. Some versions of the story say that Joe Wheeler’s ear was cut off; but later pictures of Joe Wheeler show both ears still in tact.

Mama said that George Henry Peebles’ punishment was to remove a tree stump without breaking any tendrils of the  roots using only his fork. She said the stump was displayed at Lookout Mountain in Tennessee. We were told these stories  back in the 1950s. Attempts to locate the tree stump have not yet been successful, but that may not mean that the story was not true. What is true, however, is that George Henry Peebles served as a confederate in the War Between the States. He received a Confederate Pension for a while; it was cut off and he tried to reinstate the pension. Records show that he was  receiving a pension; that the government sent a letter to him which was never picked up from the post office. Therefore the inquiry was not answered by him and the government cut off his pension by reason of his failure  to respond to that inquiry.

His stories must have been quite amusing. And likely there was some thread of truth to them. As with legends and lore in general, the stories may have evolved over time. He was quite a colorful character as the stories associated with his life attest to, especially the ones that is that have documentation associated with them.  George Henry Peebles’ military record and his family will be the subject of the next  article.