in the Revolutionary War and forward…hmmm now how could that impact a family heritage? 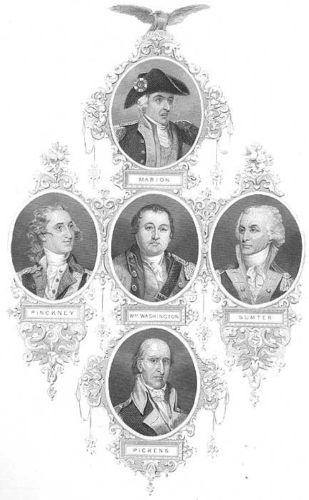 Francis Marion (1732 – 1795) was born in Berkeley County, S.C. A planter, he had fought against the Cherokees in 1759 and 1761, and when the American Revolution began, he volunteered and led “irregulars” in several engagements; because his sprained ankle had led him to leave Charleston, S.C., before its surrender to the British, he was available to command the remaining resistance in South Carolina after the colonials’ loss at Camden, S.C. Known as the “Swamp Fox” because the British Col. Tarleton called him “this damned old fox” and because he operated out of a secret hideout on a river island, he used guerrilla tactics to strike at stronger British and Loyalist forces, disrupting enemy communications, capturing supplies, and freeing prisoners before disappearing into the wilderness. From 1781 on he led his troops under Gen. Nathaniel Greene. After the war, he served in the South Carolina senate and commanded Fort Johnson in Charleston harbor (1784–90).

William Washington was born on February 28, 1752 in Stafford County, Virginia. His parents intended him to join the ministry and sent him to study with a theologian. However, in early 1776 he accepted a captain’s commission in the Continental Army commanded by his cousin, George Washington, and then fought at Long Island, Trenton (where he was wounded), and Princeton. In 1780, he transferred to the Army’s Southern Division and fought in a series of skirmishes around Charleston. The following year, he led his cavalry to victory in close combat with British regulars at Cowpens. His success there, in particular his hand-to-hand saber battle with the British commander Tarleton, earned Washington a Congressional medal. He then joined the American forces in North Carolina for battles at Guilford Courthouse, Hobkirks Hill, and Eutaw Springs, where he was wounded and captured. He remained a paroled prisoner-of-war in Charleston until the city’s evacuation by the British at the end of 1782. After the war, Washington stayed in Charleston, where he served in the state legislature. He later refused a gubernatorial nomination, but in 1798 returned to public service as a brigadier general for service in America’s undeclared naval war with France. Washington died on March 6, 1810.

Thomas Sumter (1734 – 1832) was born in Hanover County, Va. Raised on the frontier, a veteran of the French and Indian War, he settled in South Carolina in 1765. During the American Revolution he led a partisan campaign against the British in the Carolinas and the success of his small force gained him the nickname, “Gamecock of the Revolution” (and led to his name being given to the island-fort off Charleston where the Civil War began). After the war, Sumter sat in the U.S. House of Representatives and the Senate.

Andrew Pickens, 1739 — 1817 was born near Paxtang, Pa. The son of Irish immigrants, he settled in South Carolina in 1763. In the American Revolution, he helped defeat the Loyalist forces at Kettle Creek, Ga., contributed to the decisive victory at Cowpens, S.C. (1781), and commanded the forces that captured Augusta, Ga.