You could tell they were all kin…

without even knowing their names because their features were so prominent making them, perhaps, unforgettable. It seems the likenesses tended to carry through more in the males of the Peebles’ lines. I would bet if you had Uncle Dan, Uncle Henry, Gran,  and Maj in a lineup you would know they were kin. Likewise, Luther, Luke and  Polk.

William Henry Peebles was a brother to George Washington “Maj” Peebles, DANiel Edward Peebles and James Walter “Jim” Peebles. He was born in Lawrence County, Alabama, died in Morgan County, Alabama presumably at Decatur Memorial Hospital, and was buried at Cottingham Cemetery in Lawrence County as were numerous relatives. This family started out in Alabama in Lawrence County around Hillsboro, Mountain Home, Wheeler Basin or Trinity and over the years many of them migrated to Sheffield, Brick, Leighton, and other points in the Shoals. On the 1900 Federal Census Record for Lauderdale County, they all lived in Center Star, Lauderdale County, Alabama. This was due to the fact that WillMaw Willie Viola Casey Peebles’ family had land in Center Star. The Peebles’ land covered the area where Champion Paper Mill is today and crossed the Tennessee River to Lauderdale County into Center Star. Around the Center Star area relatives included Manus, Posey, Casey, and Laughlin surnames.

No matter where destiny took them, they were still one big, and I do mean, big family. The photo on the graphic below is the only one of Uncle Henry as mother used to call him that I know exists. If there are others maybe the owners will share. 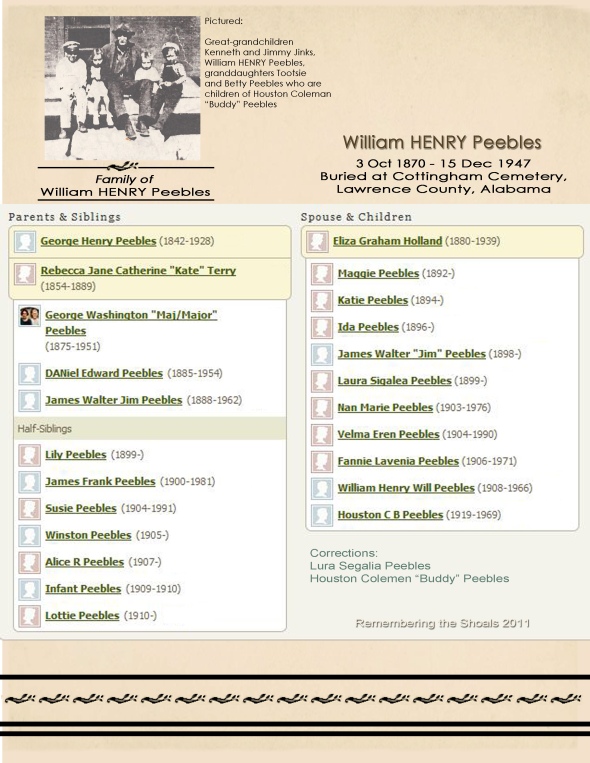 The family of William HENRY Peebles