was a powerful movie. Did you ever wonder what inspired such a gut wrenching portrayal of the military experience? Hassell G Hasford 1922-1971 and Hazel G Hasford 1929-1993 gave birth to the person who was inspired to write the novel Their son Jerry Gustave, called Gus, Hasford was born 28 November 1947 in Russellville, Franklin County, Alabama and died 29 January 1993 on Aegina Island, Regional unit of Islands in Attica, Greece in an impoverished state. His life was cut short from the complications of diabetes.

Gus Hasford during the Vietnam conflict

Always, it seemed, a person of unorthodox ways, he failed to finish high school graduation because he refused to take his final exams. He enlisted in the United States Marine Corps in 1967. He served as a combat correspondent in Vietnam.

He used his emotions, and likely the experiences during the war that was never declared a war and put pen to paper. The result of using his wartime experiences came his first novel, “The Short-Timers”, published in 1979.

It is generally assumed that the novel’s central character, the wise-cracking ‘Private Joker’, is semi-autobiographical. The novel was greeted with positive reviews and the motion picture rights were acquired by director Stanley Kubrick.

Hasford collaborated with Kubrick and author Michael Herr on the screenplay to what would become the motion picture “Full Metal Jacket”, with actor Matthew Modine portraying the Private Joker role.

Personality conflicts between Hasford, Kubrick and Herr complicated the process, or more accurately it was a conflict on how much credit Gus would get for all his hard work. All three were nominated for an Academy Award in 1987.

He was arrested  in 1988 in San Luis Obispo, California and charged with having stolen some 748 library books. He being the voracious reader and bibliophile, he got himself in to trouble with the law – over books. Sentenced to six months in jail, he was released after three months and promised to pay damages with the royalties from his next book.

The novel, a sequel to “The Short-Timers”, was called “The Phantom Blooper” and was supposed to be part of a trilogy. The trilogy would remain incomplete when, he died at the age of 45 on the Greek island of Aegina in 1993.

Here is a link to a trailer. Some people got really upset thinking this trailer spoiled the movie for them. But, it happened during the first few minutes of the movie, so it actually did not spoil anything. 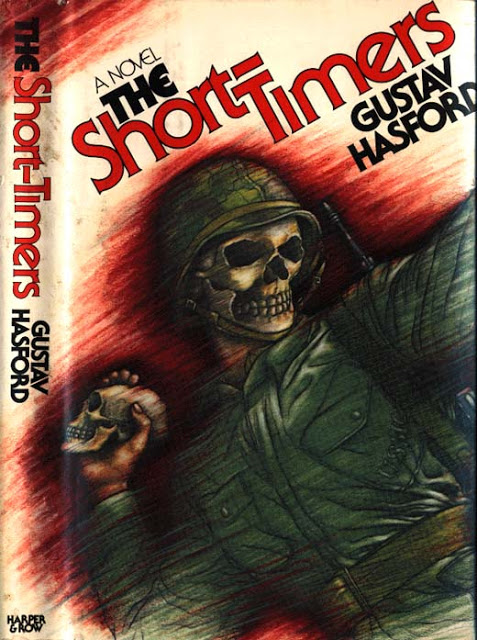 He wrote a poem that does not seem to provide a glowing review of that conflict that still haunts America, its citizenry and its veterans. Here is the poem:

Fear only the natural unreality
and kiss nostalgia goodbye.
Bayonet teddy bear and snore.
Bad dreams are something you ate.
So sleep, you mother.

From Winning Hearts and Minds, a collection of poetry by Vietnam vets, published in 1972.

“I joined Vietnam Veterans Against the War while I was still in Vietnam. About February, ’68. Also, I had a poem in Winning Hearts and Minds, published by the First Casualty Press, which was the first anthology of writing about the war by the veterans themselves.”
–Gus Hasford, LA Times Magazine, June 28, 1987

For more extensive information about this remarkable man from the Shoals area, there is a blog dedicated to him. http://gustavhasford.blogspot.com/

After all these years…

this good buddy and fellow in combat is not forgotten.

His name was  William Roy Porter. Make that Sergeant William Roy Porter. He was born 13 July 1949 in New York state, likely in the city of Oneida in the county of Madison. His parents were Stanley H and Rosemary Porter. His siblings were: Sharon, Scott, and Kyle D Porter. Sharon L Porter married James H Wylie. They live in Penfield, Monroe County, New York. Their children are Mark and Susan.  Kyle D Porter, the younger sister, married Michael Richard Comstedt. They lived in Colorado in 2011.

The last of the two brothers, Scott Stanley Porter was born 11 November 1951 in New York. Likely he was born in Oneida, New York. His death occurred 17 May 2011. He died in Sacramento, California but is buried in the same cemetery as his brother, Saint Helenas Cemetery in Oneida, Madison County, New York. The bulk of the text of his obituary published in The Oneida Daily Dispatch on 15  June  2011 reads:

Scott Stanley Porter, age 59, died peacefully on Tuesday, May 17, 2011 in Sacramento, Calif. after a long illness.
Scott graduated from V.V.S. Central School in 1969 and from Cobleskill Community College in 1971 where he received an associate’s degree.
He worked for Pan Am and United Airlines his entire life and retired in 2008.
Scott enjoyed traveling, cooking and drawing.
Surviving are his parents, Stanley and Rosemary Porter of Oneida; sisters, Sharon (James) Wylie, of Penfield, Kyle (Michael) Comstedt of Louisville, Colo.; nephews, Mark (Jen) Wylie, Christopher Wood and Chad Porter; nieces, Susan (Bryan) Gardner and Stacy Wood; one great-niece, Kailey Gardner and one great-nephew, Andrew Gardner; several uncles, aunts and many cousins.
Scott was predeceased by his brother, Sergeant William (Bill) Porter.
Family and friends are invited to attend a Mass of Christian burial to be held on Saturday, June 18, 2011 at 10 a.m. in St. Helena’s Church, Primo Ave., Sherrill. Burial will follow in St. Helena’s Cemetery, Middle Road, Oneida, N Y.

There is no further information on the eldest child, Sharon Wylie. The youngest sister, Kyle D Porter married Michael Richard Comstedt. Michael is a rather talented and renown chef.

An online search gave this review of Chef Michael: Michael Comstedt, C.E.C, C.C.E., Executive Chef & Board Member Now retired, Executive Chef Michael Comstedt brings more than 30 years of experience in hotels, restaurants, culinary competition and culinary education to Cook Street. After beginning his career with the Westin hotel chain, Chef Michael moved to Boulder in 1981, where he owned and operated the prestigious Greenbriar Inn for 15 years. Under his direction, the Greenbriar received the Wine Spectator Award of Excellence and the Mobil Travel Guide Four Star rating among other awards. A Certified Culinary Educator, Chef Michael was instrumental in the development and launch of the Professional Food & Wine Career Program at Cook Street. Chef Michael is a member of the American Culinary Federation (ACF) Accreditation Team which oversees educational accreditation at culinary schools across the country. He is also a Certified Executive Chef and a Sommelier.
Another online review dating back to 29 April 2001 was on  Bisoncentral.com – A Comprehensive Website for the Bison Industrywww.nbabison.org. The text of the article reads:

As a team , Comstedt and Reynolds founded the Professional Culinary Arts Program at The Cooking School of the Rockies, which includes local schooling as well as international study in France.

So what does all this family information have to do with the price of eggs in Cambodia? It has a lot to do with one hero from my hometown, my own neighborhood, in Sheffield, Alabama, Bill Presley. You will find the interview I wrote about Harold Hovater and Bill Presley on this site; they were both soldiers in the conflict that America seems to have all but forgotten – the Vietnam Conflict. It was named that because the President never declared it a war, but war it was.  While serving in the conflict, Bill Presley made a new friend in the person of SGT William Roy Porter. Porter’s family called him Bill. They met during the war and became steadfast friends, but only for a brief span of time. The following is what I know about SGT William Roy “Bill” Porter.
Sgt Porter was born 13 July 1949 in New York, likely in Oneida in Madison County. Recently his father, Stanley H Porter, was listed as living in New York and being the age of 92 years-old. His mother was Rosemary; it is believed that her maiden name may have been Boyd. Young Porter’s tour start date in the military was 4 September 1969. He served in the Army of the United States as an Infantryman. His ID Number was 134401554. He ranked as Sergeant and his Grade at loss was E5.

William Roy Porter’s Unit was 3RD PLT,  A CO,  5TH BN,  60TH INFANTRY,  9TH INF DIV,  USARV. His life was cut short on the Incident and Casualty Date of 2 June 1970. His Age at Loss was a mere 20 years. The Incident  Location was in Cambodia, Province not reported. His death was considered a ground casualty under gun or small arms fire. He died outright in a Hostile environment. His body recovered.

He was just a young boy when he met his demise. He and Bill Presley knew each other only a few short weeks, but Bill has not forgotten his friend yet. The online rubbing of his name on the Virtual Wall is to the left.

Sgt Porter’s final resting place would also become the same cemetery that his brother Scott would be laid to rest at in Oneida, Madison County, New York. The cemetery name is Saint Helenas.

KIA in Vietnam Conflict in Cambodia.

Bill and Nelda Holloway Presley have made attempts to find Sgt Porter’s family. They thought they had come across the family in Georgia, but that was another Porter boy. This my friend, Bill, is the family of that young boy that died so needlessly so long ago. Enjoy.

And this is as close to a photo of Sgt Porter as I could get. It is a photo of the marker for his grave. But for the brave, we would not be free.