that did not get attached to the article when it published: 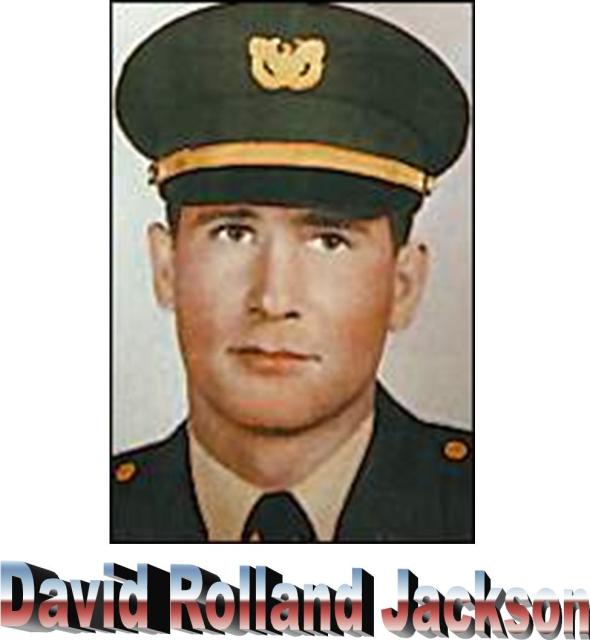 Sheffield native killed in Vietnam to be honored

A former chief warrant officer from Sheffield who was killed during battle in the Vietnam War is being inducted into the Alabama Military Hall of Honor.

David Rolland Jackson, a U.S. Army helicopter pilot, was killed during a mission in 1969, about two weeks before he was to end his tour of duty in Vietnam. Before he was killed by enemy gunfire while piloting a helicopter, U.S. Army officials say Jackson’s actions resulted in the lives of numerous American soldiers being spared.

“Through his timely and courageous actions, he was responsible for saving the lives of several of his comrades and instrumental in the defeat of the enemy force,” U.S. Army officials wrote in one of the numerous citations recognizing his military achievements.

Jackson, who would have been 65 had he lived, will be inducted in the hall of honor Oct. 31 during a ceremony at Marion Military Institute. Only 38 other Alabamians have been inducted into the hall.

His widow, Mary Jackson, of Sheffield, said she sent an application of the hall of honor committee in 2007, but her late husband was not among those who were chosen.

“I’m thrilled,” Mary Jackson said. “I felt he deserved it because he lost his life doing a brave thing. It’s a great honor, but unfortunately, it doesn’t bring him back.”

He was born in Sheffield on Nov. 13, 1942, and attended Sheffield High School. He left school early to join the U.S. Navy and returned home three years later to work at the Sheffield Fire Department. He enlisted in the U.S. Army on Oct. 24, 1967.

Nearly two years later, on Sept, 22, 1969, Jackson volunteered when American troops involved in a fierce battle in South Vietnam sent out an emergency call for a resupply of ammunition.

The helicopter Jackson was flying began taking on gunfire from automatic weapons as it approached the drop site.

Unable to land, Jackson continued hovering over the drop area until the ammunition was unloaded. He returned later in the day to complete the mission and bring out several severely wounded soldiers despite taking on heavy gunfire from enemy soldiers.

Jackson, a member of the 71st Assault Helicopter Co., was not as fortunate three days later.

With his bags already packed and ready for a transfer to Germany, Jackson again volunteered for a dangerous air assault mission near the village of Chi Tu. A bullet fragment that penetrated the helicopter struck Jackson, and he died before receiving medical attention.

“Based on the citations, David was a real good pilot,” Mary Jackson said. “He was doing his duty and trying to help those who were in danger.”

The Jacksons had two children during their marriage, both of whom no longer live in the Shoals.

Sheffield historian Richard Sheridan helped Jackson file the application to have her late husband considered for the honor.

“I didn’t know him personally, but his record is worth the recognition,” Sheridan said.

Jackson’s co-pilot for those two September 1969 missions is now a chaplain at the Pentagon.

He wrote a story detailing the missions after Jackson’s daughter wrote emails seeking to hear from people who knew her father.

“It gave me a lot of closure although it was very graphic,” Jackson said.