Hello Soldier, I am your brother…

Hillard and this is our little sister Alice.

Somehow it was always Alice who got into trouble, perhaps it was because Hillard just wouldn’t agree to punishment. Alice was in charge of seeing that her young brother got home in a timely manner from school – and herself for that matter. That must not have been an easy task because so much seemed to peak his interest. That particular afternoon the  trek home from the schools across town seemed particularly harrowing for Alice. 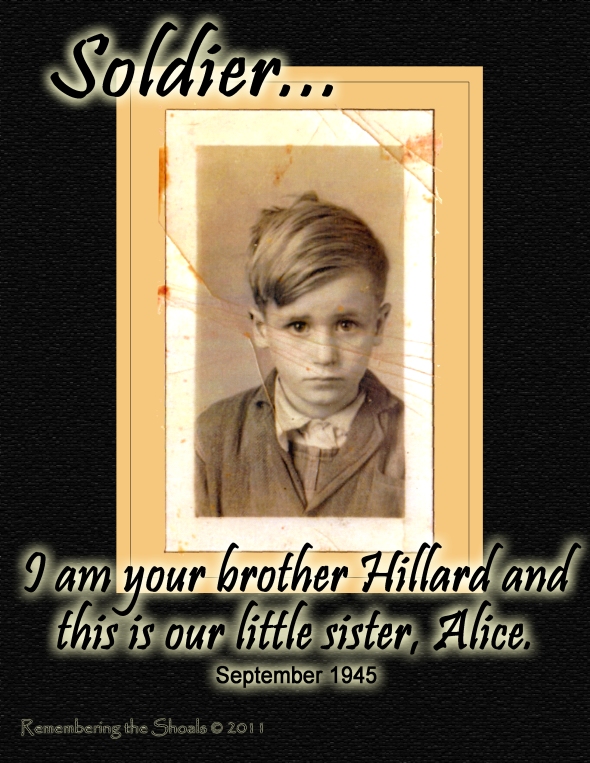 She recounted the story of that afternoon and it seemed a movie was playing in her head as she relived the events of that unforgettable day. It was a day in early September of 1945. She was but nine years old, or almost for her birthday was in December. She was exasperated with her brother because she was sure that he would get her into trouble with his lollygagging.  After all the past is prologue.

Something had caught her brother’s attention further down the sidewalk in downtown Sheffield that particular day. He hurried to the store down the street.  I am sure she must have tapped those little feet and let out a few breaths of aggravation as she insisted that they go on down the road toward home; he refused to budge. Hillard later said it was a soldier with an Army duffel bag going down the street and then into the store.

When they reached the grocery store just a few blocks before the train tracks, Hillard stopped dead in his tracks. His little nose was pressed against the windowpane of the storefront window. Alice must have thought aloud and asked, what now?

World War II had just ended. Then, Alice noticed there was a soldier in there. The soldier was drinking a Coke. Alice noticed Hillard’s gaze go up to the soldier’s mouth  (and his little nose go up on the windowpane) as the soldier lifted the Coke bottle to his mouth, and then down as he lowered the bottle and its precious contents to the table again. Again. Again. And again. Alice nagged at him to come on,  let’s go home; but to him she was all but  invisible. All that mattered was that Coke bottle and the path it took from table to mouth, from mouth to table.

But then, she noticed something else. Maybe it was the soldier’s gold tooth that had her brother in awe of the young man in uniform. Not that the little boy and girl were not patriotic, but a Coke was a rare and precious commodity, and so was a gold tooth – a real genuine gold tooth. Gasp.

Of a sudden the little boy bounded forward and entered the store. She was caught unaware. She fumed as she considered that Hillard might have a nickel in his pocket. A nickel would buy a Coke, but just one.  She steamed that, dern, she didn’t know where he would get them but it seemed that Hillard always had a nickel in his pocket. A child with a nickel was exceedingly rare in those hard times that came on the heels of the Great Depression and a world war that had just ended. So, she drug her feet and went in after him hoping that he would just come on home with her and before she was to get into trouble because of his precociousness.

Her brother made a query of the object of his intense study. He asked, “What is your name soldier?” The soldier answered, “James Murray.” The little boy said, “Soldier, I am your brother Hillard and this is our little sister, Alice.” Now, anyone with one eye and half-sense could predict what was to happen next.

Little brother and sister remembered for a lifetime the thrill of that day. Their mother had died when Alice was just a little girl and Hillard not much older. James Murray was but fifteen and the oldest child when his mother died. There was another brother, Ed Lee, who was the second oldest child.

Hillard and Alice recalled that their brother got them a taxi cab and they went shopping. Hillard and Alice recounted that, “He bought us everything.” Hillard stated about the day and the length of time it took to get home from that point that James must have known everybody in the town. It must have seemed like the whole entire town talked to and welcomed their big brother back home.  I don’t think anyone got in trouble that day for getting home late from school. To this day Hillard states that James was his hero. Much too late to ever tell him, I discover he is my hero, too.