ordinary and extraordinary, might describe members of the large Elias James family. Pictured below are Elias James and Cynthia McGary Richardson James and their large family. Elias James fought as part of the valiant 16th Regiment of Alabama Infantry, CSA in the War of Northern Aggression. He was a relative of the infamous James brothers, Frank and Jessie. The outlaw Jessie James was rumored to be hiding out at Elias James’ place at one time.

Elias James married Cynthia McGary Richardson, (b. 4 Mar 1847, d. 18 May 1915). They settled at Pogo, just West of Pleasant Site, where they resided in a log cabin that had a “beautiful cold water spring” and a “milk house where milk was kept cool in the running water”. This is at the base of the Freedom Hills, overlooking the beautiful valley.

The buildings are now gone but the James cemetery is still there, hidden in the woods above where the cabin once stood. The cabin is the backdrop for the family photograph below

Cynthia was the daughter of John Richardson (b. 14 Jan 1796 GA, d. 12 Jan 1876) and Nancy Hester, (b. Oct 11 1808, d. Jan 26 1853). At least two of Cynthia’s brothers served in the Confederate Army and fought at the Battle of Shiloh. Cynthia’s maternal grandparents were William H. “Buck” Hester and Amy Malone. Amy was the daughter of John Malone and Anne Blackwell of Granville County, North Carolina. “Buck” and Amy Hester came to Franklin County in 1818.

Tell us what you know about them. 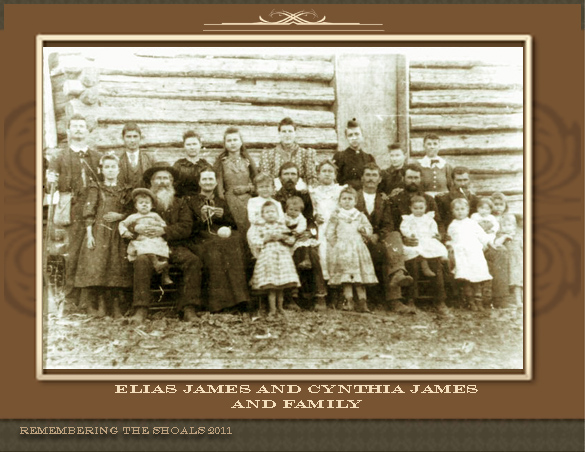